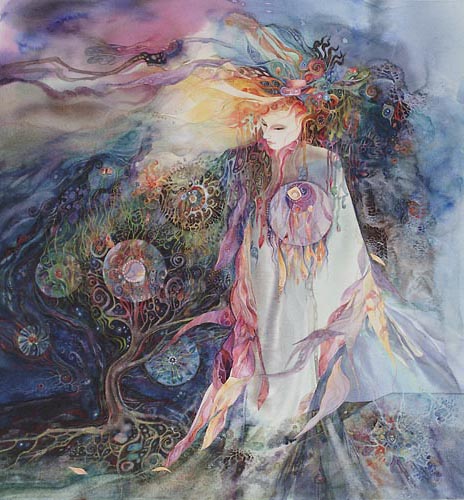 
Representing healing, learning and inspiration, Brighid was a powerful protector, commonly associated with both hearth and smithy fires.  When Christianity arrived, her name changed to St. Brigit, and the Celtic people continued loving her without fear of reprisal.  This painting is about the great wheel.  The days of spring are at hand.  A beacon of light and warmth, Brighid sings of change, past winter gales, and the coming warmth.  Beneath the sighing of wind through the meadow grasses, and in the merry crackling of the fire, her voice may still be heard:  “Respect the fire, tend to your hearth, and to the home of your heart I’ll guide thee.”

THE CALL OF THE GODDESS 2004
THE ART & PROSE OF HELEN NELSON-REED
Used with permission
www.Lapizmoon.com   www.fine-art-studios.com

Brighid is a Celtic Goddess that has survived from ancient times into the daily rituals of present day.  Brighid’s name is derived from the Gaelic “Breo-Saighit” meaning “fiery arrow”.  She was known as ‘moon crowned Brighid of the undying flame’.  She is a powerful Goddess that is associated with Fire, Healing, Poetry and Women’s concerns. Her feminine strength has been a guiding light burning in the hearts of women both past in present.  Her festival is Imbolc on February 1st to celebrate the first warmth of spring which comes to waken the cold winter’s slumber.  Brighid also calls initiates of the Goddess home to the fire within their hearts at this time.  We find her influence throughout France, Ireland and Great Britain.  She is called Bride in Scotland, Brigantia in England, Brig, (pronounced Bree), Brighid, Brigid or St. Brigit in Ireland, and Brigu in France.  In Wales she is believed to also be known as Cerridwen and in ancient Bath as Minerva or Sul.  Her influence was wide spread throughout ancient Celtic Cultures.  Her light continues to shine today. 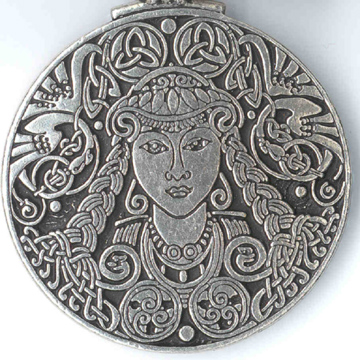 During the change from Paganism to Christianity in Ireland St. Brigit appeared. She was born at dawn on the threshold of the house her mother lived in.  It is said her father was a Druid free man and her mother a Christian bond woman. She was full of light, courage and inspiration.  Saint Brigit was known as the foster-mother of Christ or Mary’s aid woman.  She was a great healer and adept at augury and miracles.  St. Brigit was literally a bridge between ancient paganism and modern Christianity and was accepted in Ireland by both the pagan people and the presiding Christian powers without violence.  The people then and now invoke Saint Brigit for protection, compassion, and courage in the face of poverty and abuse.

You are a branch in Blossom.
You are a sheltering dome.
You are my bright precious freedom.
Brigit, lead me home.
~Author Unknown Milk and the Magical white cow with red ears said to have an inexhaustible udder, this association signifies Brigit’s
amazing powers of creating miraculous abundance for those in need

Sun - Brigid is originally believed to have been a Sun Goddess

The elements of Fire and Water

The hearth and its fuel peat is sacred to Brigid

Eire – the land of the Tuatha (the people) 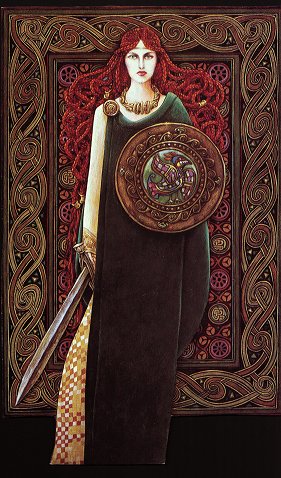 ASSOCIATIONS:
Brighid was associated with the sword and shield.  She was a Goddess of protection.


Plants:  Dandelion “the little notched of Bride”
Nettle associated with Brigid and the element of fire and healing.
Trees:  willow and rowan


COLOURS ASSOCIATED WITH BRIGID
Blue as in her magickal mantle or shawl.  When I have astral journeyed with Brigid she wears her blue mantle.
Green as this is the colour of Ireland, spring, healing and the heart chakra
Red for fire and creativity
Gold for warmth of the sun and the colour of the grain harvest
White for spiritual purity


Brigid presides over births, women’s issues, healing the environment, helping with increasing courage, finding your life purpose or direction, protection, warmth in relationships, warming the body by the hearth and creating warm foods to be eaten for warmth and healing.  She is a source for practical knowledge of herbology, hands on healing, and creative expressions of art.  Brighid is also a guide in healing of the spirit and body.  She is an amazing companion and will guide with strength and compassion.  Brigid was also known for her great gift of augury.  Augury was the ability to put both hands together as a tube in front of your eyes (like a telescope) and look through and see what was happening many miles away transcending space and time. Brighid will help in developing intuition and psychic abilities.  Brighid truly is “an excellent woman”.

Brigit Is A Triple Goddess

It is said there were three Brigit’s - all sisters, each with her own associations
All three represent transformation:
Rock to metal – Goddess of Smith craft
Illness to health – Midwife Goddess of healing
Ideas to Art – Goddess of Poetry and Creativity
It is also said that she is the two-faced Goddess
One side of her face is black and withered and the other white and fresh
Associating her again with the transformation of winter changing to spring 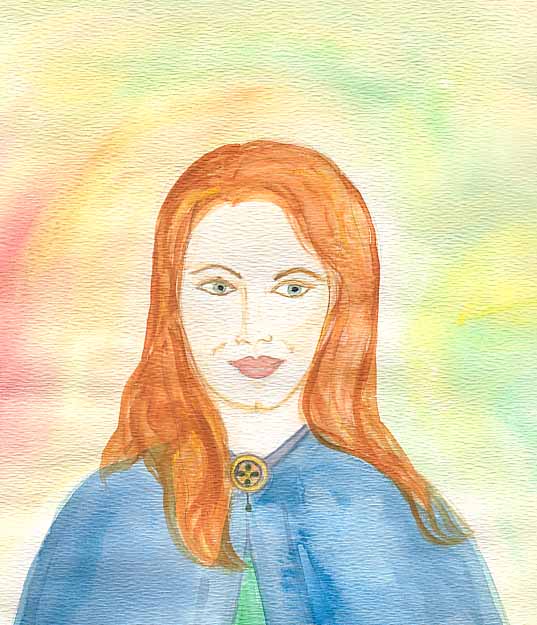 INVITATION TO BRIGHID
By Lavanee


Set up an altar preferably by a fire, either with candles burning, an outdoor campfire or at the fireplace or wood burning stove, if none of these are available set up in the kitchen near the cooking stove.

ON THE ALTAR
A mantle (cloth) of blue, green or white
One large white candle (you may add more candles if ye wish!)
Incense of your choice – scents associated with foods or teas are appropriate such as cinnamon, vanilla, almond or bergamot.
A few gathered river or beach stones and shells with bright colours especially tending to orange or yellows would please Brighid
very much
Be sure to have the elements represented – Earth (stones), Air (feathers, the colours of yellow and astral blue), Fire (candles) and Water (shells, tea).
Suggested offerings – herbal tea, freshly baked bread and butter, and blackberry jelly
Have paper and pen ready to write down Brighid’s shared wisdom for you will definitely want to remember it in detail!
If you would like music to accompany your ritual, Celtic harp music would be most appreciated.
If you have a wooden wand handy cast your circle with it.  A peeled willow branch decorated with Celtic symbols would be appropriate.  I have a cherry wooden wand which I use with great magical results.

Cast your circle in a clockwise direction, Light the center candle and incense and recite the following affirmations and chants.

AFFIRMATIONS:
Have at least one affirmation ready for yourself to chant as Brighid will call you to find your true hearts desire.  Self love and inspiration are especially loved by Brighid for she loves you and will reach inside of you to bring out your very best.
Suggested affirmations:
“I radiate love & wisdom”
“Love flows into my life like a river”
“My heart glows with the fire of unconditional love”

Dear Brighid
Excellent Woman
Please join me in my quest
Light the fires within my heart
Guide me to my destiny
Open my hands, mind, and heart
To the truth, purity, and love
Of my feminine nature

Be sure to have a comfortable chair or sofa to meditate on as I am sure Brighid will enjoy your company and share with you now.  Share your offerings and be prepared to step into the light of your true self!

Bless you all my sisters!

We will never, never lose the way
to the well of her memory.
And the power of her living flame
it will rise, it will rise again
By Starhawk

This page is the intellectual and creative property of Lavanee.