Is not my chair protected by the cauldron of Cerridwen?
Therefore, let my tongue be free
In the sanctuary of the praise of the Goddess.
The Bard Taliesin 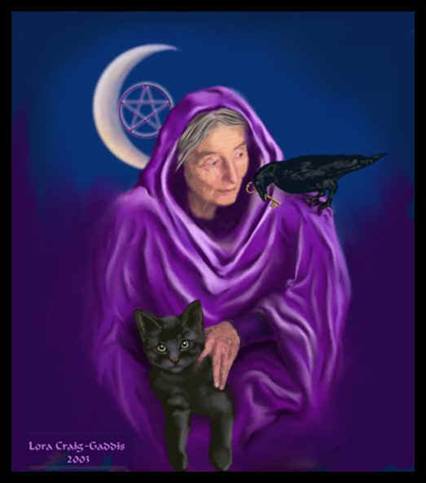 The Welsh Goddess Cerridwen brewed a magical potion for her son, to make him the most brilliant and inspired of men. She set a boy named Gwion to stir and guard the cauldron, and a few drops bubbled onto his hand. Gwion instinctively sucked the burned hand, and instantly all the wisdom and knowledge of the universe was apparent to him. Cerridwen, angered, pursued Gwion as he shapeshifted from one animal to another and finally to a grain of corn, whereupon Cerridwen, who had shapeshifted as well and was now in the guise of a hen, ate him.

Nine moons later, Cerridwen gave birth to Taliesin, the greatest of all bards. In him was all the wisdom of his mother's magic. Cerridwen's cauldron is but one of many magical cauldrons and vessels in Celtic lore. It is a powerful symbol of transforming magic, and of the lessons learned through change and experience, as well as divine creative inspiration.

Your cauldron full of life’s mysteries

With change comes forth growth

Life surrenders to your loving embrace

To once again be reborn 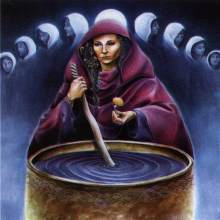 some information from Full Moon

In contemporary Witchcraft, the cauldron is an important magical tool that symbolically combines influences of the ancient elements of air, fire, water, and earth. Its shape is representative of Mother Nature, and the three legs upon which it stands correspond to the three aspects of the Triple Goddess, the three lunar phases (waxing, full and waning), and to three as a magical number. Additionally, the cauldron is a symbol of transformation (both physical and spiritual), enlightenment, wisdom, the womb, of the Mother Goddess, and rebirth. 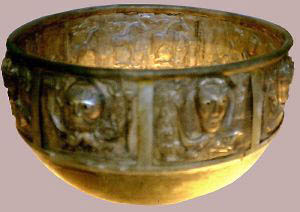 Since early times, cauldrons have been used not only for boiling water and cooking food, but for heating magical brews, poisons, and healing potions. They have also been utilized by alchemists and by Witches as tools of divination, containers for sacred fires and incense, and holy vessels for offerings to the gods of old.

If a large cauldron is needed in a ritual, it is generally placed next to the altar, on either side. Small cauldrons, such as ones used for burning of incense, can be placed on top of the alter.

In Middle Ages, most of the population believed that all Witches possessed a large black cauldron in which poisonous brews and vile hell-broths were routinely concocted. These mixtures were said to have contained such ingredients as bat's blood, serpent's venom, headless toads, the eyes of newts, and a gruesome assortment of animal and human body parts, as well as deadly herbs and roots.

In fourteenth-century , a Witch known as Lady Alice Kyteler was said to have used the enchanted skull of a beheaded thief as her cauldron. Also in the fourteenth century, a male Witch by the name of William Lord Soulis was convicted in for a number of sorcery-related offenses. His peculiar form of execution was death by being boiled alive in a huge cauldron.

According to an old legend, if a sorceress dumped the vile contents of her cauldron into the sea, a great tempest would be stirred up.

Ancient Irish folklore is rich with tales of wondrous cauldrons that never run out of food at a feast, while an old Gypsy legend told of a brave hero who was boiled in a cauldron filled with the milk of man-eating mares.

It is said that bad luck will befall any Witch who brews a potion in a cauldron belonging to another. If the lid is accidentally left off the cauldron while a magical brew is prepared, this portends the arrival of a stranger, according to a superstitious belief from Victorian-era .

The cauldron and its powers are associated with many goddesses from pre-Christian faiths, including Hecate (the protectress of all Witches), Demeter/Persephone (in the Eleusinian mysteries), the Greek enchantresses Circe and Medea, Sirius (the Babylonian goddess of fate and mother of the stars, whose cauldron was made of lapis lazuli), the Celtic goddess Cerridwen, from whose cauldron bubbled forth the gifts of wisdom and inspiration.

Although the cauldron has traditionally been a symbol of the divine feminine since the earliest of times, there exist a number of male deities from various Pagan pantheons who also have a connection to it. Among them are the Norse god Odin (who acquired his shape-shifting powers by drinking from the cauldron of wise blood), the Hindu sky god Indra (whose myth is similar to Odin's), Bran the Blessed (the Welsh god of the sacred cauldron), and Cernunnos (the Celtic horned god who was dismembered and boiled in a cauldron to be reborn).

Depicted on the famous Gunderstrup cauldron (circa 100 B.C.) is the stag-horned Cernunnos in various scenes with different animals. Believed by many to be of Celtic origin, this large silver cauldron may have once been used in sacrificial rites.


The use of sacrificial cauldrons can be traced to the ancient religious and magical practices of various European cultures, as well as to some shamanic traditions. Human and animal victims would first be beheaded over the cauldrons and then have their blood drained out into the cauldron, where it would be boiled to produce a mystical substance. Among the Celts, a potion of inspiration was said to have been brewed in such a manner by the priestess of the lunar goddess.

The cauldron is linked to the Holy Grail - a chalice that is beleived by Christians to have been used by Jesus Christ at the Last Supper. However, prior to its incorporation into Christian myth in the twelfth century, the Grail belonged to British paganism as a symbol of reincarnation and the divine womb of the Goddess.

The Cauldron of Cerridwen

Cerridwen, a deity associated with the feminine symbols of water and the Moon, is the shape-shifting Celtic Goddess of inspiration, wisdom, and the magical arts of enchantment, divination, and prophecy. She possesses the three aspects of the maiden, mother, and crone, and is a goddess whose invocation is a significant aspect of both the initiatory and mystery rites of Celtic magic.

In her mysterious cauldron, according to ancient Celtic legend, Cerridwen prepared a potion of enlightenment for her son that consisted of the yellow flowers of the cowslip, fluxwort, hedgeberry, vervain, the berries of the mistletoe (a plant sacred to the Druids), and the foam of the ocean. It was warmed by the breath of nine maidens, and required brewing for a year and a day.

A youth named Gwion drank three drops of the potion, causing the rest of the brew to turn into poison and destroy the cauldron. To hide from the angry goddess, he used his newly-acquired shape-shifting powers to change himself into a grain of wheat. However, Cerridwen transformed herself into a black hen and devoured him.

Many Witches pour a bit of ordinary surgical spirit (rubbing alcohol) into their cast iron cauldrons and light it carefully dropping in a lit match. This is often done as part of healing rituals, invocations to the elemental spirit of fire, scrying divinations, sabbat fire festivals, and various working rituals. (Note: A quarter cup of alcohol will burn for approximately three minutes.) Be sure that the cauldron is resting securely on a fireproof stand and is not close to any flammable substances. Do not touch the cauldron while it is hot unless you cover your hands with protective oven mitts. If the fire must be extinguished before it burns itself out, smother it by covering the cauldron with a lid or by sprinkling salt or sand over the flames. Remember, whenever working with the element of fire, use caution and common sense, and respect the spirits of the flame.

The sight of a cauldron blazing with fire can be very magical and mesmerizing, and when the alcohol has ben steeped in aromatic herbs, a sweet but gentle incense-like fragrance is produced. To make an herbal cauldron spirit, put a small bunch of any or all of the following into a glass bottle: fresh lavender flowers and leaves, fresh mint leaves, fresh rosemary flowers and leaves, and fresh thyme flowers and leaves. Fill the bottle to the top with the alcohol, cap it tightly, and then give it a good shake. Keep it in a cool place for thirteen days, shaking it twice daily (every sunrise and moonrise). Strain it through a double thickness of muslin into clear bottle. Cap it and store it away from heat and flame. Cauldron spirit will keep indefintely.

Divination is an art that has been practiced in one form or another since the ancient times and in all levels of culture.

There are a number of ways in which a cauldron can be used for divining. One method is to fill the cauldron with water or wine and place it between two burning candles or under the bright silver rays of the Full Moon. Relax, clear your mind of all distracting thoughts, and then gaze into the cauldron as you would a crystal ball. As with other forms of scrying, your vision will begin to blur after a while and a slight haze will begin to materialize. Keep your gaze focused and eventually a vision, either of an actual or symbolic nature, may be revealed to you.

To determine good or bad omens, according to an old Pagan method, place a cauldron on the ground and burn some incense (traditionally frankincense) or a handful of dried herbs in it. Mugwort, rose petals, vervain, and yarrow are popular herbs of divination among Witches. If the smoke rises straight up to the heavens, this indicates a good omen. If it does not rise or if it touched the ground, this indicates a bad one. 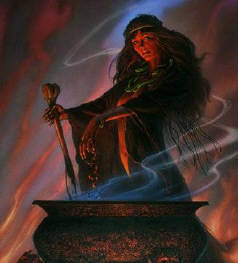 Permission granted for use of “The Witches Cauldron” by Amita Dragonspell  (http://www.magickrituals.com/boscauldron.html)

This page is the intellectual and creative property of